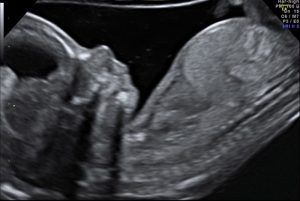 As I was processing after meeting with a client recently, the Holy Spirit whispered to me that Assurance stands at that crossroads in our clients’ stories.  This was not a new revelation, but a reminder that what they choose when they leave our office will direct where their story goes and ultimately how it ends.  The difficult truth of abortion is that they are not only re-writing their story but are deleting a character from the script.  Our clients may be literally terminating a hero in their story.

When I got to the end of these chapter books, I always wanted to go back and read the book with the alternate ending.  However, I felt a little guilty about doing so.  Interestingly, I thought, “I chose the direction of the story, I should be happy with the way it ended.”  Inevitably, I would return to the crossroads and choose a different direction to see how it could end.

When our clients have the opportunity to witness an ultrasound, it is as if they get a glimpse of what an alternate ending could look like.  They don’t get to see the whole outcome but a foreshadow of what could be.

I sat across the room from this young man who was at a crossroads in his life.  In his mind, he had already chosen which direction he and his girlfriend were going to take.  When he returned from witnessing the ultrasound, he stated that his initial reaction was “amazement.”  He was amazed that life had already begun and that there was a baby growing inside of his girlfriend.  He took a deep breath and stated, “I can see how if someone were planning this (pregnancy), that this could be a beautiful moment.”  He received a glimpse of how his story could be different.

In light of this young man’s articulate and profound observation, I was able to lead him through a discussion about adoption.  I shared with him how some couples don’t have the ability to experience the amazement of pregnancy themselves, but that the gift of adoption can be a beautiful moment as well.  It turns out that there may be another alternate ending to this story.