After fleeing from a life of sex, alcohol, and drugs as part of the adult entertainment industry, “Channell” arrived in Kentucky hoping for a new start with the support of Refuge for Women.

One year later, Channell, having graduated from the rehabilitation program, was facing a new battle – she was pregnant. Although Channell had joined church and accepted Christ as her Savior and Lord, she had fallen for a guy, who like many of the men she knew before, offered her only empty promises. Their relationship soon became volatile and took a turn for the worst. Channell ended the relationship, but the thought of having his child frightened her. Thankfully, a woman Channell was working for told her about Assurance and the support we could provide during her pregnancy. Armed with the freedom she had received in Christ, the previous counseling and support at Refuge for Women, and the help from Assurance, Channell decided to keep her child even if that meant raising her alone. 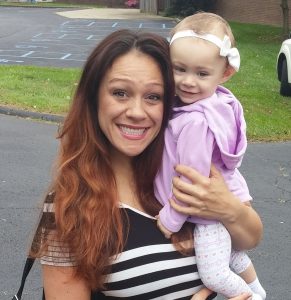 “From the moment I walked in, everyone was super nice and kind,” says Channell. “It was important to me that they were faith-based and had Christian values.”

Channell began the REACH program and partnered with one of the amazing volunteers at Assurance, Anca Martin. Of their time together, Channell recalls that Anca was “warm and patient.” The times spent in the weekly REACH sessions were filled with laughter, learning, and tears. “It really helped me gain spiritual maturity, and I learned a lot about building relationships in Christ through the Bible studies,” says Channell.

Channell attended REACH up until her daughter was born and picked right back up within a few months. Through the sessions, which Channell says helped her to build the confidence and self-esteem to become a healthy mom, she earned Baby Bucks which she used to get items she and her baby needed, such as diapers, formula, and clothing.

“When I received my first bag of goodies, it was like Christmas,” recounts Channell. “I was so surprised and grateful.”

Beyond the material supplies Channell received at REACH, she says that the program provided her with wise instruction on relationships, mothering, education, and employment. Her mentors not only helped her learn to make wise choices, but they pointed out her skills and helped her to find her talents and use them for Christ.

Today Channell and her daughter “Lyla”, who is now 9 months old, have a bond that can be seen a mile away.  Her daughter is bright and full of joy, and Channell is pursuing a new career. “With the help of Assurance and my mentors, my daughter and I are safe: I have my own apartment, my own car, and I attended college,” says Channell. “Assurance changed my life, and if they can change one, they can change 100’s, even 1000’s more!”